El Santo (whose real name was Rodolfo Guzman Huerta) was born on Sept. 23, 1917 in Tulancigo, Hidalgo, Mexico. He began his professional wrestling career at the age of 16 under his own name, at the Peralvillo Cozumel Arena, on June 28, 1934. His aliases included Rudy Guzman, El Enmascarado, El Hombre Rojo, El Murcielago 2, and El Demonio Negro. He first appeared in the ring under the name "EL SANTO" eight years later (debuting July 26, 1942). He continued to wrestle until Sept. 12, 1982 (his last match being at the El Toreo de Cuatro Caminos in Mexico.) So his professional wrestling career spanned a total of 48 years!

Santo started out as a "rudo" (bad guy) in the ring, but years later (in the early sixties) decided that becoming a technico (good guy) would greatly enhance his career. A publisher named Jose Cruz started a "fumetti"-style comic book in 1952, featuring Santo's adventures fighting crime and monsters on a weekly basis, which popularized Santo into a near-legendary figure in Mexico. The comic book series (4 volumes) ran continuously for about 35 years, and is probably the most famous superhero comic book in Mexico.

Santo was asked by a film producer to appear in a 1952 Mexican serial called "THE MAN IN THE SILVER MASK", in which he would've played the silver-masked villain, but he refused to appear in it, thinking it would fail at the box office. Another well-known wrestler, El Medico Asesino, wound up starring in it as the hero. The success of the comic book series in the 1950's persuaded Santo to rethink his position regarding film appearances however.

His first of many Mexican film appearances was in "THE EVIL BRAIN", filmed very cheaply in Cuba in 1958. In this film, Santo played an unnamed masked agent who helps the police combat a mad doctor. It was quickly followed by the equally awful "THE INFERNAL MEN", in which he played an unnamed masked man who aids a police agent in capturing some drug smugglers. In a sense, Santo actually played the heroes' sidekick in these 2 films.

It was only in 1961 when producer Alberto Lopez hired him to star as "El Santo" in the now-classic "SANTO VS. THE ZOMBIES" that his actual movie career began. Santo was paid less than $1,700.00 to appear in that film, but his salary later increased to almost $ 9,000.00 per film in 1964 when producer Enrique Vergara stole Santo away from Alberto Lopez by offering him more money.

All told from 1958 to 1982, Santo starred in a total of 52 Mexican movies (2 of which were only cameo appearances). He co-starred in 9 of those films with the Blue Demon, another famous Mexican wrestler who also enjoyed a successful film career of his own. Santo's most successful film was "THE MUMMIES OF GUANAJUATO" (1970), which also co-starred Blue Demon and the great Mil Mascaras. By 1977, the masked wrestler film craze had practically died off, but Santo continued to appear in more films over the next few years. His last film was "FURY OF THE KARATE EXPERTS", shot in Florida in 1982, the same year he retired from the ring . Santo officially retired from wrestling on Sept. 12, 1982 (the week before his 65th birthday), but he continued to make personal appearances.

El Santo was married twice. His wives were named Maria de los Angeles Rodriguez and Eva Enriqueta Vallejo Vadager (Mara). He had a total of ten children with his first wife, and an eleventh child years later with his second wife. Santo publicly unmasked himself on the Mexican TV show "CONTRAPUNTO" on Jan. 26, 1984 (which was almost exactly 50 years from the day he began wrestling). He died from a heart attack a week later on Feb. 5, 1984, at 9:40 pm. He was 66 years old. As per his wishes, he was buried wearing his famous silver mask. His son, El Hijo del Santo (real name: Jorge Guzman), has appeared in several Mexican movies himself and still has a distinguished masked wrestling career of his own today. 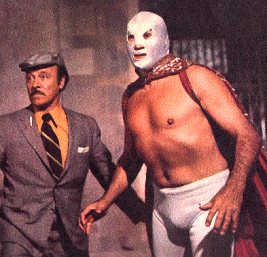